I come in late.  My daughter has gone to sleep.
There is an army of old shoes scattered,
they seemed like verve this morning,
tonight they have suddenly grown old.
There is a cold air from the window over her head,
she likes being friendly with the outside,
she is not so lonesome sleeping in my bed,
often she lies awake in the back
where her mother made her the princess bed with curtains
and stars, listening to the people next door
cursing each other.  She says her mother told her
people’s religion keeps them together
all life long, shouting at each other.
I get lonesome back there with strangers,” she says,
she misses her little brother complaining in the night.
She likes to see her mother twice a week
and has a witch who lives under her bed with a buzz saw.
She has to twist and turn to protect her feet.
I wish I had a witch under my bed with a buzz saw
who’d cut me clean in half while I was asleep.

My father wrote this poem during the separation and divorce from my mother.  It’s very visceral, and at the same time very literal.  That first year was extremely hard and my father and I kept each other going.

I was 11 and my primary residence was with my father, while my 3 year old brother stayed with our mother. We still lived in the same Greenwich Village apartment at 173 Bleecker Street, with living room windows that looked out on the street below. When you first entered the apartment it was into the kitchen. There was a make shift closet in the opposite corner with a curtain across it. Shoes were always spilling out at the bottom.

My parents had given me the only bedroom in the apartment and one summer, while I was visiting Birmingham, my mother removed the long sliding doors from the closet and placed my twin sized bed inside it.  Using gold paint she drew interlocking circles on the wall at the back (“stars”), and draped diaphanous curtains across one end. It was undeniably my Princess Bed. I was almost 8, and quite in awe. I did silently wonder what I would do for a closet, but then she showed me the free standing wardrobe she’d built for me.

When my brother was born we became roommates. I had the far end and he had the end closest to the rest of the apartment. A partition divided us, but I could hear every sound he made. When he was a newborn, it was easier for me to hear him than it was for my parents and I was often the one who had to tell them he was crying. Sometimes it was easier to change his diaper myself just to speed up the process. Despite it all, when my mother and brother were no longer with us, I missed them.  Occasionally, when I was feeling down, I would ask to cuddle up to my dad on the fold out bed in the living room.

My father grew up in a family that was very gung ho on fresh air, and he carried on the custom. There was a window near the head of my bed, Manhattan apartments are notoriously overheated, and my window was always open at night. There was only one problem with this, which was that the window opened onto an “Air Shaft”. In Manhattan, this is a legally required open gap area between two buildings that would otherwise be completely butted up alongside each other. An air shaft provides fresh air, some degree of light, and a reverberation of noise that would make a movie sound engineer proud. Add a married couple who have screaming arguments with each other at night to this equation and they might as well be standing in the room with you.  My father was accurate in his account of what my mother told me when I asked why our neighbors stayed together when they clearly hated each other.

Other than nail biting, the one expression of anxiety I had was a witch living under my bed. She’d been there for several years. She did indeed have a buzz saw and I had to keep changing my position to prevent being dismembered, at least until I fell asleep. Whenever I had to go to the bathroom at night, I would also cleverly avoid having my feet cut off at the ankles by taking a flying leap off of and then back onto my bed.

I remember finally telling my father about my witch. Fortunately, she stayed behind when my father married my stepmother and we moved out of the apartment. 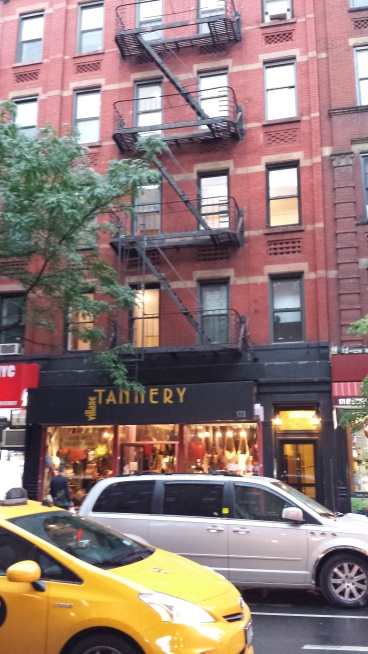 173 Bleecker Street, between Sullivan and MacDougal Streets.
The store downstairs was a launderette when we lived there. We were on the 4th level if you count the ground level. Our two windows were the left side of the fire escape.