The poet—a political animal?
Yes! Yes!
The way you said that phrase undressed me completely.
There I was naked in a painting of Orozco
holding up a torch which was my own
arm burning above the elbow.
And you yourself were Father Hidalgo
tolling the church-bell of Dolores,
pulling yourself straight up into the air
with your own emotion.
At a moment like that, who would not agree?
yes—yes—a poet is a political animal.

But he is as many other kinds of animal as possible, too.
A suffering animal—delegated
to take on the madness and feckless atrocity of us all,
and of everything.
A hungry animal.
Everything at which he looks with passion
he desires to eat.
A living animal—almost so much more alive
than he or anyone else can have the patience to endure.
A traveling animal, emitting and transmitting
A fighting animal.  He is always down
at the back fence gathering handfuls of ass-manure.
He is able to throw three hundred yards
and strike his enemy in the eye without fail.
A capricious animal.
Here he is sniffing at the holes of bad fortune
and good fortune,
he is trying to decide which will taste better
and is worth digging out of the ground.
A lustful animal.
See how everything he looks at makes him either angry
or in love?

He is always down by the docks helping Venus
out of the sea to be raped.
He is always avenging her rape in a vertigo of righteous rage.

Well then, of course–
when he has been all these kinds of animal,
what you say, too.
Certainly he is in love with the idea of kings and queens,
also presidents, secretaries, first commissar’s
leaders of communes, oligarchists and prime ministers.
He does not disdain dictators.
He has been one, he expects to be one again,
at the first overturn of the state.
Do you see that creature crawling below
about the ballot boxes, snuffling?
It is he.
Also that one standing on the balcony
eating up the cheers.
If there is anyone who loves justice he is there
if there is anyone who loves injustice,
he is there also.
He is in whatever place anyone lives or no-one.
Whatever gave you the idea he was any person in particular?
He was intended to be you.

Cesar Ortiz Tinoco was a Mexican diplomat who worked at the United Nations in Manhattan. He was the husband of Elizabeth Lambert Ortiz, a poet, writer of cookbooks and other things, and regular contributor to Gourmet Magazine. He was short and compact, while Elizabeth was tall, large boned, full figured, and English. Together, they made one of the most entertaining couples I have ever met. They also greatly enjoyed their cocktails, and came to every house party we had.  Elizabeth consistently wore an attractive cluster of chunky Mexican silver jewelry and they suited her large frame.  Cesar’s position as a diplomat once brought them an invitation to a party at the Irish Embassy.  They laughed as they told us it had been addressed to Mr. and Mrs. Cesar O’rtiz, thereby proving that everyone really is Irish on St. Patrick’s Day.

According to a 1985 interview, my father said that Oscar Williams introduced him to Elizabeth.  All I know is that a photo of my father with Elizabeth was taken on the same day as a photo of my father with Oscar.  My stepmom says that she remembers that poet Hy sobiloff contacted my father to ask him for tutoring on poetry, and help with his own writing.  According to her, the photos of Oscar, my father, and Elizabeth were taken when Sobiloff flew them all out for a weekend at his summer retreat on Long Island (possibly Montauk). She believes that this is when my father first met Elizabeth.

Elizabeth and Cesar hosted one legendary dinner party in 1967, to celebrate her newest effort, The Complete Book of Mexican Cooking.  Elizabeth had spent at least two years testing and perfecting the recipes for the book.  Misguidedly, someone left Craig Claiborne, the food critic for the New York Times, in charge of mixing the margaritas. I think I remember hearing about his “special recipe” during the aftermath.  Everyone had a great time and got up to leave. One guest immediately slid down the stairs on the way out. A second was so dazed she left her glasses in a taxi. A third tripped over on the walk home. Basically everybody in attendance had some sort of accident on their way home other than my parents. My parents made it home safely, and at about 2 AM my father got up to get a glass of water in the kitchen and promptly passed out. The following day was spent trading stories of post-party mishaps.

Elizabeth’s Mexican cookbook contained a recipe for Mexican Wedding Cookies. She’d enjoyed that particular cookie at my parent’s annual Christmas party for years, but still did a taste test of over 10 alternate recipes for comparison. In the end she said, “None of them are as good as yours!”. To this day Elizabeth’s book is still available and page 286 says, “This recipe was given to me by my friend Adriana Keathley Glaze, the dancer and actress”.

For more detail about Elizabeth Lambert Ortiz you can read this link:
https://www.theguardian.com/news/2003/nov/27/guardianobituaries.booksobituaries 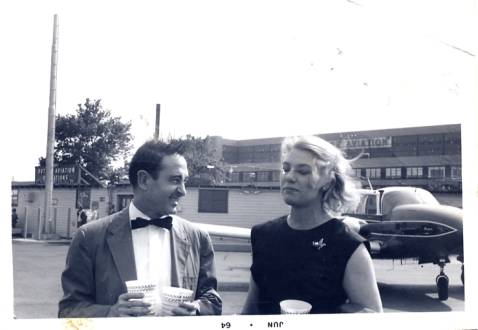 Photo by Adriana Glaze. Property of the Andrew Glaze Estate.