Racketing with fierce crashes of musketry,
they clatter behind risings, dashing across
bare hills in patterns of horses.
Tiny caissons crawl, shuddering past,
bent with piles of the bloody wounded and dead,
creaking to the bullet-shattered gossamer whinings of fife.

It’s a vision of the kingdom we come from,
the republic we have been setting out for,
two ghostly realms divided
by a mystic ridge running along between
two terrible fates, like a double brink.

What does it want from us? Pointless to weep.
Pointless to blame. The vision clears, rises
like wood-smoke, and does not disband.
Still it’s there, awaiting, as we enter the machine again,
and move off through leaf-doors and walls of shadow play.

© 2015 Andrew Glaze, from the book Overheard In A Drugstore

My father was very familiar with Route 81. The most direct highway between New York State and Alabama, the highway is paralleled by the Blue Ridge Mountains to the East and the Appalachians to the West.  The crest of the Blue Ridge Mountain Range has a road called “Skyline Drive” which is well known for both it’s beautiful views and the fact that it overlooks sites where six major Civil War battles took place in Virginia during the “1862 Valley Campaign”.

The Civil War between the Northern and Southern states is part of our family heritage.  We were on the defeated rebel side. Despite that historic loss, memoirs, antiques, ancestral photos, and pride in that history, abound throughout my family tree.  So when, in the late ’60’s, a newly published photographic history of the Civil War arrived in the mail, my father pored over it with great interest.  It was the first time he’d seen photographic evidence of the darker side, and featured black and white pictures of starving prisoners of war, piles of dead bodies, graphic photos of the wounded, and survivors with missing limbs.

After he and my stepmom moved from Manhattan to Birmingham in 2002, they made an annual summer trek to rural property we owned in Pine Plains, New York.  When they decided to visit Skyline Drive during one of those trips, he remembered those photos, and became inspired by the contrast of beautiful views and Civil War battle descriptions.  The end result was this poem. 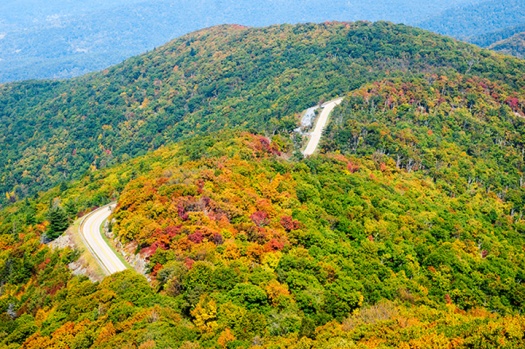 Skyline Drive at the crest of the Blue Ridge Mountains, in Virginia.  The Shenandoah Valley is below. The valley was the site of 6 major battles during the Civil War.