Father Sun is just settled down in a red haze
up the farthest slope of the  Ramapos, when suddenly out
from   the dusk with a rushing and a tinkling,
we’re  assailed by spectral shadows. They swirl our way
down through the sun-careening fire-dazzled woods.

They’re the show girls, draped in Jean Harlow  dresses
scissored down to the buttock-nape.
They shriek tinnily in high double heels, giggling and slipping
on shiny Phillipine grass, they spill their  bathtub gin
and stand for a moment , lifting their glasses
to toast the sun’s wild footlights off to the West.

They’ve tittered like ghosts down from Billy Rose’s house
on the rise behind, with its English windows and grey slate roof,
its paneled jazz-age rooms.
By the old liquor closet at the unused central flue,
you can almost hear the Volstead dicks come ghosting up the drive,
with a wail, from Wampus Pond and Armonk, down below.

They’ve come, with a great scattering and screeching and to do,
draining the bathtubs, the ghostly Vermouth and Juniper juice,
pouring it out among the actual roots
of the memory trees, where they soar
skyward, like the joyous dream of a lark.

None of them glows in the effulgent sunset
or lays out what blazing road goes by, opens a ghostly door
or fades the light down silent driveways of the imagination.
They are frolicking, a thing and a place where we can never be or go.
Salute their voyage!

© 2015 Andrew Glaze, from the book Overheard In A Drugstore

There is a school-yard style poem about burlesque dancer Sally Rand and Broadway Producer Billy Rose, which, when read aloud correctly, is obscene.  I had completely forgotten the ditty until I looked up Sally Rand on the internet and rediscovered it.  Afterwards, I remembered that when I was a teen, the topic of Sally Rand came up one day and my father recited it in amusement. Sally Rand and Billy Rose have long since left this world, but the poem remains.

In reality, Billy Rose didn’t just have a house, he had a giant mansion known as “Rose Hill” in Mount Kisco, just outside of Manhattan in Westchester County, New York.  Built in 1928, right in the middle of prohibition, chances are great that they really did have bathtub gin parties.  “Volstead Dicks” is a reference to the detectives responsible for enforcing the “Volstead Act”  that made alcohol illegal between 1919 — 1933.

Rose had several wives, one of whom was the famous comedienne Fanny Brice.  A composer of more than 400 songs, at least 50 of which were huge hits, including, “Me and my shadow”, and “It’s only a paper moon”, Rose became an impresario, producing shows for both stage and screen.  In 1936, he produced, “Sally Rand’s Nude Ranch” at the 1936 Fort Worth Centennial as part of his Casa Manana show at the fairgrounds.  She was best known for her burlesque routines using giant feather fans to artfully peek-a-boo her way through sensual dances.

I’m not sure what inspired my father to come up with the poem.  My stepmom and I have not been able to remember anytime when he saw the house in person, but it’s possible we just weren’t there at the time.  Or, perhaps he read an article about it somewhere.  There was an enormous fire at Rose Hill in 1956, but the mansion was rebuilt afterwards.  It wasn’t until 2019 that another fire completely destroyed it.  At this very moment, you can go on-line and purchase undamaged stained glass windows and a stone fireplace that remained.  Billy Rose passed away in 1966, but a new replica of Rose Hill is currently in the process of being built. Clearly, the public is reluctant to let it slip away and vanish.  I like to think that it’s because they enjoy envisioning the same ghosts that my father imagined. 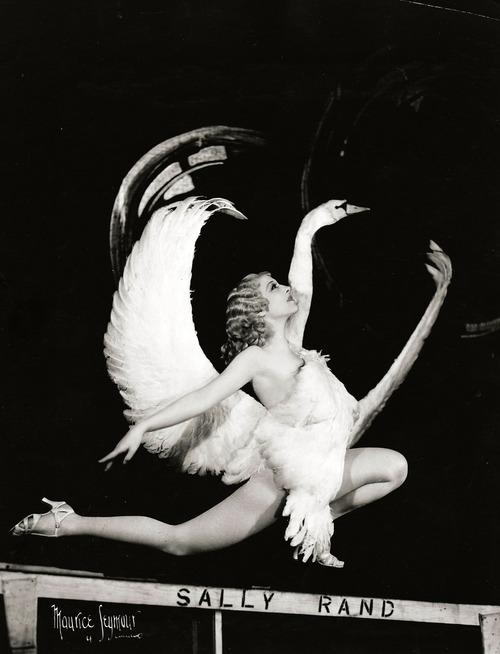 Sally Rand in one of her feathered burlesque costumes.

The facade of Billy Rose’s home in Mt. Kisco, NY, “Rose Hill”.  A birds eye view revealed the full extent of the size, which consisted of extended wings behind the front of the building.

Historically, the word “flue” means the chimney itself.  This is a photograph of a room in Billy Rose house.  To quote my father’s words, “Paneled jazz-age rooms.
By the old liquor closet at the unused central flue”.  Currently, if you have a yen to share history, you can buy the entire mantel for $25,000.