Drop from the train’s bottom step onto the grit,
turn out of the wind, ravel the hood of the parka tight.
It’s gristly clear, the black night fizzes with frost,
Venus and Jupiter sit near the moon like steps.
There’s an old barge canal and water locks;
You cross on the steel plates, rubber soles clanging.
First, a shallow skitter over frozen mud.
Then a steady booming of timed trudge
over the long bridge across the Connecticut,
frozen about the abutment islands.
They extend white claws.
Smoke steams from a chimney like a solid cloud.
Nobody knows you in any of the passing cars,
no obligation keeps you from climbing the rail,
dropping in the coiled swirls of the water below.
Your breath comes fast, your spirit jumps
high above the network of girders.
On the far side, a strip bar, evilly lighted, waits,
and long sidewalks of the tight-closed houses of strangers,
growling dogs, a rustle of distant throughway,
long lurching alone.
Then, through the darkness, rises up at last–
like a reward, as though you knew
this was how it should have been arranged–
warmth, singing, a cavern of people.
Your feet will have lost all feeling.
But the joy will come flying.
It works every time.

Originally published in The New Yorker in January of 1982, my father began writing this poem in 1978. He was inspired by a train ride to Connecticut, and the short walk he made to a theater in Stamford. He was about to see my stepmom perform in the out-of-town “try-outs” of the musical “Ballroom”. It was the last chance for the producers to tweak the production before previewing and opening the show on Broadway, and it was an exciting time for our family.

“Ballroom” came about when the producers and directors of “A Chorus Line” decided to see if they could strike gold twice. Inspired by a successful 1975 TV movie titled, “Queen of the Stardust Ballroom”, the story was about a widow who finds a brand new life, friends, and a lover, when she takes up ballroom dancing.

At our apartment, the phone rang one day to say that Director and Choreographer Michael Bennett needed retired older dancers who were once part of the Broadway circuit. My stepmother had been in the original cast of Camelot in the 1960’s, as well as other shows, and the grapevine had tracked her down. The dancers also included Liz Sheridan, who eventually became Jerry Seinfeld’s mother on the TV show “Seinfeld”.

My impression was that no expense was spared. I remember my stepmom “oohing” over the fact that their shoes were all created by the elite, Paris born, shoe designer Maud Frizon. They were absolutely gorgeous, and had to be specially designed and reinforced for ballroom dancing, but must have cost a small fortune.

On the Premier night, all the stops were pulled out and a huge post performance party was held at Windows on the World, the restaurant at the top of The World Trade Center’s North Tower. The restaurant was only two years old at that point, and considered the very height of glamour. Family members were also invited to the party, which is how I ended up there. Traditionally, post-premier night parties go on until the early morning newspaper reviews come out. I think I ended up lying across a few chairs to take a nap.

The reviews were not unanimous in praise and, despite a score and lyrics by Alan and Marilyn Bergman, the song “Fifty Percent” was the only one that went on to post Broadway fame and fortune. Nominated for 8 Tony Awards, and 7 Drama Desk Awards, “Best Choreography” was the winner for both.

But the main problem was the basic plot line. It featured an older cast, and a widow who finds a lover she’s happy with, but he’s a Catholic trapped in a loveless marriage. After an emotional struggle she decides to accept the situation. In the final scene she is voted “Queen of the Stardust Ballroom” and dances with her lover at her side, singing, “I wish you a waltz” along with the entire ensemble.

Ticket sales struggled, probably because the subject matter mainly appealed to an older generation, a fan base of widows who were greatly inspired, and ballroom dancers.  I was in my 20’s and could see it was too realistic for dewy eyed young adults.  It also wasn’t something you’d take your kids to see for a family outing. The production ran for 116 performances on Broadway, before bringing down the final curtain.

Michael Bennett’s next endeavor struck gold in 1981. It was the original Broadway production of “Dreamgirls”. 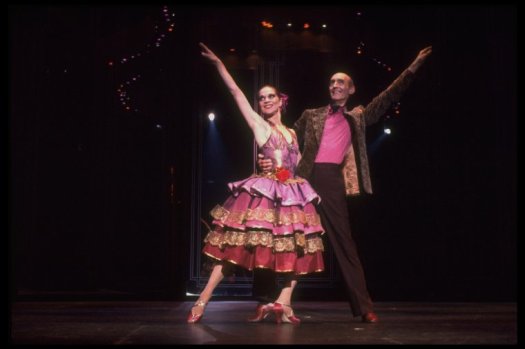