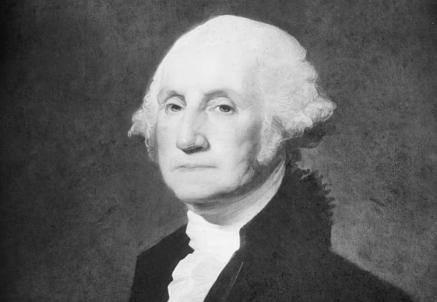 It’s a great comfort to know this country had a father
and that he was as crazy as my father.
That with a presumption of faultless logic
he was able to get involved in a lifelong attachment to that Potomac mud
trapped in the horseshoe bayous around his farm.

Damn it, he thought (I presume), his fields could feed on that thick black
almost edible slime!  And like the rest of us easy-to-humbug men
he thought anything he was able to reason out
was possible. A most endearing fallacy like any number of mine.

Up in his workshop he contrived a machine
for making the river move-to float out the gravel
and leave the dirt. But he was as pragmatic as he was visionary.
While reason plotted, he worked a crew of slaves
in a sort of holy war on behalf of the land.

Of course he was always just about to be almost finished (and happy)
till he caught the pleurisy that made him a finished monument.
The congressmen swarmed in out of the patronage lines
preparing posthumous lies to be brought out
about the honors, etc., appointments, the general had or should have confirmed.

And they came trotting over when he seemed about to speak, saying “any advice for the nation sire?” not wanting any, really
but willing to listen to the man.
Well, he sat up of course and made the fools get out of his way like flies.
His last anger went off like a cannon.
It burst with a splash above the river bank.

“Look at that, gentlemen! –Look at that glorious mud!
That’s what life is about, that mud!
And I shall get my hands on it, or perish!”
Which brought on a fatal convulsion and perfected his vow.
So he had a good death, happy, involved,
convinced he had just been washed by the logic of his century
to a glorious death in the battles of tides and erosions and rivers.

I have no idea how my father learned about George Washington’s flirtations with collecting mud from the Potomac River.  Apparently, Washington’s fascination began with an invention titled “The Hippopotamus”, which was invented by a Mr. Donaldson. According to the Mount Vernon website, Washington loved the concept, and there was a flurry of correspondence with Mr. Donaldson, but he never actually purchased the contraption.  Instead, he did his own experiments of ways to bring mud up from the Potomac River to his farm fields.
—–E. Glaze
The machine created by Mr. Donaldson is shown below. 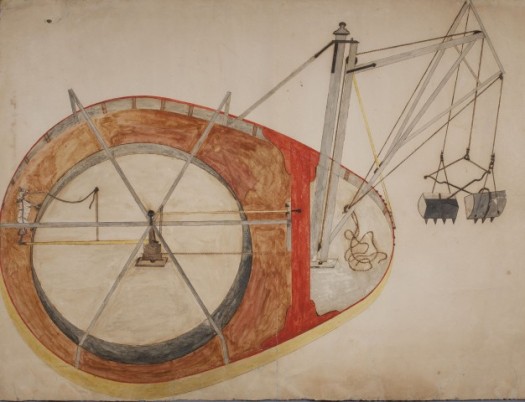 “The Hippopotamus”, an invention by Mr. Donaldson.  It was used to bring river bed mud up from the river to fertilize farm fields.  I believe the drawing shows a view from the air.